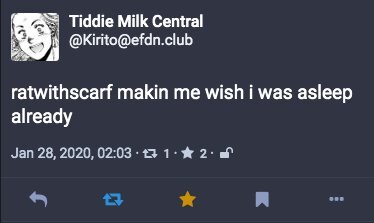 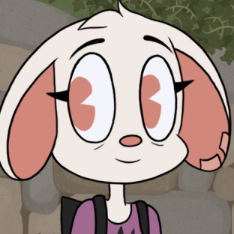 if we're mutuals on main or you're an efdner, don't worry about the lock. if we're strangers, worry about that lock and go follow my main instead

new pinned toot cause some people apparently don't read my bio before hitting that follow button! the nerve!

this is my shitposting alt, but it's also my personal alt, so i have specific rules about who gets to follow it

if we're mutuals on my main @ratwithscarf or you're an efdner, don't worry about the lock. submit follow requests with reckless abandon!

if we're strangers, worry about that lock and go follow my main instead. i'm much less picky about who follows my main, and if i think your posts are good, maybe i follow you back, and then you can follow me here!

(Spoiler City - My gawd - you've been warned! Spoiler Police, turn back before it's too late! You're on Wildbill's owl-hoot trail now, and I'm armed to the teeth with a virtual Sharps 50 caliber buffalo rifle, fitted with a virtual sniper's scope!!)

(You see, this document doesn't conform to anyone's stupid dictated guidelines for writing game-FAQs. If someone doesn't like the way I go about it, tough dirty kitty litter, Kemo Sabe! Make your own, and go kiss the rusty tails of the videogame gods while I'm enjoying playing games - the very purpose for which they are dynamically designed! So, if deleting threads on your board that discuss the enjoyment many people derive from playing the translation community's products is your bag, you're in the wrong place. Go back to your narrow-minded, egomaniacal, ante-diluvian, self-imposed corner of Hell.)

Okay, just to get game-lovers back on task, those of you who don't have bad attitudes and pouty-faces, all of you free-spirited mavericks out there who are not members of the club and can think-outside-the-box:

We are in Chapter 4, late in the game, following the Battle of the Heroes. We've gone to Alania and entered the final dungeon in the game, only to discover on the second floor that the SNES Lodoss FAQ floating around the web has suddenly petered out.

If D-D has released its English version patch of Lodoss, and you're playing it, and that petered-out FAQ has turned out to be right handy up 'til now, this crazy document will either help you, piss you off, or both!

So, moving right along...  At the intersection just past the entrance to this final dungeon's second floor, you will get blasted in the cabeza with the following message:
"Trust magic? Go right.
Trust blade? Go left."

If you turn right, you'll wind up in the extreme NW room with the Iron Golem that was described in the last entry of that nice-but-incomplete FAQ floating around the web.

Ergo, if you made it this far:

*Whip the tail off that pesky Iron Golem in the NW room.
• Seize the magic Key 1 from the treasure chest.
• Dash back to the intersection where you turned NW to reach the NW key room.
• Proceed SW until you reach an intersection.
• Zip SE to a corner.
• Start to walk SW, but 👁️

the hottest of takes

i am going to limit myself to one more quote from this article, but hoo boy it's a doozy

i regret to inform you this sentence continues with "suited to anyone with an interest in world history or international politics,"

admin mentioned the forbidden anime, had to boost the thread

me: alright i'll test fantasia with the efdn group and that'll be the next campaign-

efdn group: creates a interesting order of pilots of fish mechs for an armour astir one shot

@Paul tf u mean ruining it, this is our peak

it's the finale of our campaign and we're ruining it

okay, quick informal question: which is a better violation of the rules, bringing a defeated character back for another round or introducing a new. dangerous threat?

found this while prepping, good image

tomorrows game is going to break a few rules in every direction, so it'll be interesting to see how this goes

okay, quick informal question: which is a better violation of the rules, bringing a defeated character back for another round or introducing a new. dangerous threat?

if we're mutuals on main or you're an efdner, don't worry about the lock. if we're strangers, worry about that lock and go follow my main instead